Soil moisture refers to the water in the soil between the soil surface and the (freatic) groundwater level. This part of the soil that is above the groundwater table is called the unsaturated zone. Soil moisture in this area is replenished by precipitation (or irrigation) and capillary rise from deeper layers, and is depleted by percolation, soil evaporation and plant transpiration. By its nature, at the boundary between the atmosphere and the solid earth, soil moisture plays a very important role in the energy and water balance of the continental earth. The amount of fresh water stored in the unsaturated zone is very important for providing water and nutrients to the biosphere.

The most basic measure of water in the unsaturated zone is water content or wetness, most often defined as the volume of water per bulk volume of the soil. In this case a value 0.3 \(m^3/m^3\) refers to a soil in which 30% of the total volume consists of water. In some cases soil moisture is expressed as a percentage (or fraction) of saturation. In that case 0.3 indicates that 30% of the available spore space in the soil is occupied with water.

The amount of water that can be held in the soil is limited by the porosity. Here porosity is the volumetric fraction of the total soil volume that is taken up by the pore space. This space is available for a fluid such as water. Porosity typically ranges from 0.3 and 0.7 for common soil types. Higher values are usually associated with clayey soil and lower values with more sandy soils, see the Figure below. 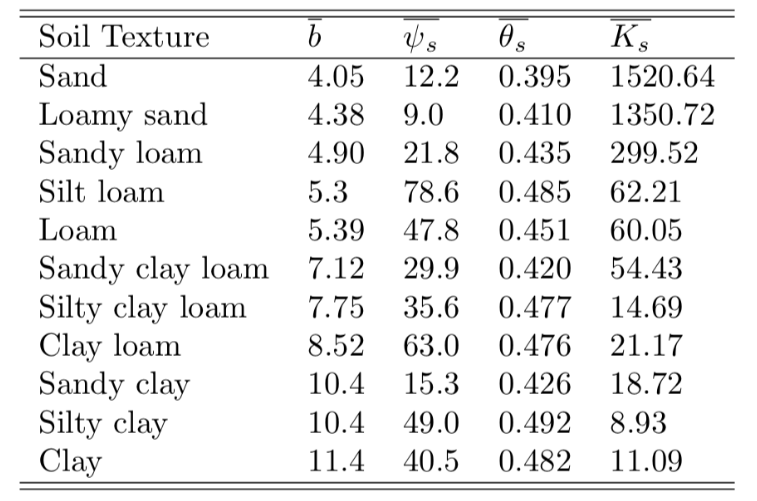 The importance of soil moisture for agriculture¶

Plants need to transpire water to drive the uptake of nutrients and water. For this both water and energy need to be available. Because most vegetation, including agricultural crops, gets the water it needs from the soil it is obvious that the moisture in the soil is a very important factor determining the success of a harvest. Furthermore, the timing of the water availability in the soil is also important. Because the relation between water content and suction head is soil type dependent the soil type itself also plays a very important role.

Feddes et al. (1978) developed a simple model of root water uptake by plants which describes how plants react to water stress. The figure below demonstrates this principle. Plants can extract water optimally between h2 and h3 (field capacity and the critical suction head value). Above that (between h2 and h1, near saturation) plants cannot extract water optimally anymore (in the wet range). In the dry range (between h3 and h4, the wilting point) a similar reduction can be seen. Clearly the actual values of h1 to h4 are plant specific. For drought resistant plants the h3 value can be much lower while for plants that can cope with very wet soils the h2 value can be much lower.

Although the stress function is a simplification of reality of it works very well in most cases. However, it is important to know that this focuses on the water limiting side of the plant transpiration process only. If energy is limited (not enough sun) the soil moisture can be in the optimal range while plant growth is reduced compared to normal circumstances.

Because of the direct relation between the satellite derived soil moisture (in \(m^3/m^3\)) and the suction head (as shown in the equations in the previous section), we can use satellite derived moisture directly to monitor the water stress condition that the vegetation experiences.

Soil moisture, soil temperature and vegetation optical depth (VOD) are retrieved by VanderSat from satellite microwave measurements between 1.4 GHz and 36.5 GHz. An important property of microwave data is that it is not sensitive to cloud cover, and therefore global daily data coverage can be provided. VanderSat developed a patented downscaling technique (VanderSat, 2016) that can be applied to passive microwave observations, which typically have a spatial resolution of 25x25 km. The VanderSat downscaling technique reconstructs the antenna footprints of each individual observation and uses the abundance of overlap between these footprints for downscaling purposes sampled at a resolution of 100x100 meter.

The downscaled microwave observations are then linked to land surface variables, including soil moisture, land surface temperature and vegetation optical depth (biomass) through a retrieval algorithm, the Land Parameter Retrieval Model (LPRM, Owe et al,. 2001; Owe et al., 2008; De Jeu et al., 2014). The core of the LPRM was developed in the early 2000’s in a collaboration between the VU University Amsterdam and the National Aeronautics and Space Administration (NASA) and has been further developed (e.g., Van der Schalie et al., 2017). Dr. Richard de Jeu is one of the leading scientists that developed this model as well as the proprietary downscaling technique together with team members at the VU University Amsterdam and NASA, and since 2015, at VanderSat.

The basis for the retrieval relies on the fact that thermal radiation in the microwave region is emitted by all natural surfaces as a function of temperature. The propagation of microwaves through the soil is then dependent on the soil dielectric constant, which has an almost linear relationship with soil moisture. Microwave technology is the only remote sensing method that measures a direct response to the absolute amount of water in the soil, with a sensing depth ranging from millimeters for 37 GHz to tens of cm for 1.4 GHz. Vegetation also contributes to the microwave signal by absorbing, reflecting and emitting radiation. The LPRM solves the radiative transfer equation at different frequencies and polarizations to retrieve soil temperature (Land Surface Temperature (LST, TEFF)), soil moisture (Volumetric soil moisture L band (SM)) and VOD (Vegetation Optical Depth C band (VOD)). Within the VanderSat retrieval, water bodies are treated separately, and a flagging system was developed to signal other potential interferences to the microwave signal including radio-frequency interference (RFI), frozen soil, snow, and heavy rain events (see Data Flags).